Handling and raising errors in Python plus some novelties introduced in 3.11 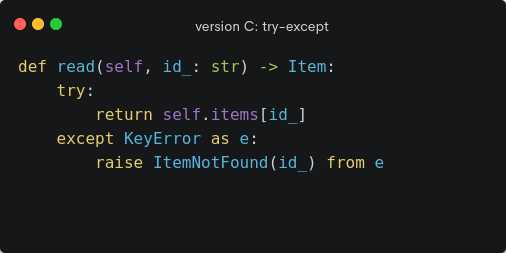 I wouldn't have thought that 5 lines of code can inspire great conversations about permission versus forgiveness, early exit, and interfaces.

But that's exactly what I learned a few weeks ago when we set up an interesting poll on Twitter about implementing a relatively simple read function.

A lot has happened in the 27 days since this poll. This post won't comment on the changes around Twitter but will highlight some related features in the newly released Python 3.11. 🙂 It's time to revisit those 5 lines of code.

The original question was: Which version of this code do you prefer?

Look Before You Leap vs Ask for Forgiveness

The first fundamental question is: Should we use an if to check whether this item exists or rather a try-except block?

This is an area where code adhering to the semantics is also more performant.

It might be intuitive why this is the guideline from a semantic point of view: Use exceptions for stuff that's considered an "exceptional" case. And if branches for the various happy paths.

But why is this guideline also wise from the performance point of view?

If you're interested in some measurements about the costs of conditional statements and exception handling, check out this blog post by Sebastian Witowski. Or his talk Writing Faster Python 3 at EuroPython in 2022.

In the example above, we expect id_ to be a valid ID. Providing an invalid ID is an error case. So, we should use a try-except.

On 24 October, Python 3.11 was released. Which makes the above guideline even more valid than before. While in earlier Python versions, the cost of checking for exceptions was low, in 3.11, it's practically zero.

This is due to a change in the compiler:

If you're curious how jump tables made this change possible, check out Real Python's article about Cool New Features in Python 3.11

The feature zero-cost exceptions was inspired by Java and C++. The idea behind it: While it makes sense to handle various errors, you probably want to optimize your code's speed in the happy path.

Why Not Just Return None?

Returning None is a quick solution, but it has several drawbacks:

For more examples of how returning None can go wrong, see Item 20 in the book Effective Python

Which Error To Raise?

Now that we've agreed on raising an error, the next question is: What type of error should this be? We'll discuss 3 solutions:

Pass the Error to the Caller

An interesting suggestion was not to use a try-except block at all. If a Exception occurs, let the caller of our function handle it.

This can be a great strategy, if the called code (in our example: self.items[id_]) already throws a quite specific exception.

It's less practical if the called code raises a very general exception, like a KeyError. The caller of our API might have a hard time figuring out where in the call hierarchy this KeyError happened.

In Python 3.11, a further possibility was introduced: You can add notes to exceptions.

Let's assume that the called code raises a specific error. Instead of wrapping it into a new type of error, you can add a note to it:

Raise a New Error from the Previous Error

In our example, we don't get a specific exception, just a rather generic KeyError. In that case, it makes sense to define a new exception class and raise that instead. Use the from syntax to include information about the original error in the stack trace:

Define an Exception Hierarchy for Your API

This approach means a bit more upfront work when designing the API but gives a lot of flexibility to the consumers of the API. They can easily:

Python provides several ways to handle errors, and 3.11 introduced further great features in this area. If your code happens to be more complex than this tiny example (and especially if it contains async operations), make sure to check out exception groups as well.

Two questions to consider when dealing with errors:

The Twitter poll Thanks to everyone who contributed to this insightful conversation: